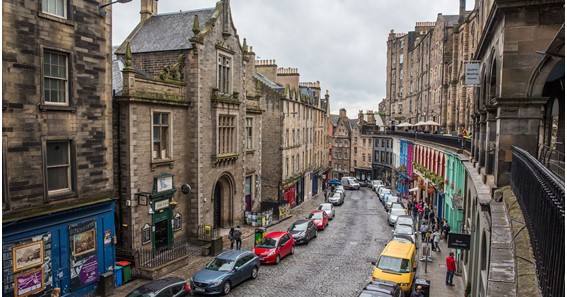 Edinburgh is more than just the capital of Scotland; it is a compact city full of attractions that can be enjoyed on foot through its winding connection of narrow lanes, tall hills, and one-way streets.

But if you are looking to observe beyond the normal paths of Edinburgh, you will want to travel on their public transport system with direct routes to all four corners of the city and 24-hour bus services.

Here are five different ways to move about Edinburgh efficiently while enjoying this attractive city.

When you want to travel with precision across town, you can’t go wrong with riding the trams.

Edinburgh’s tram map shows that it runs in a straight line from Edinburgh Airport to York Place in New Town with the added benefit of running service regularly and typically faster than the bus because the trams have fewer stops to make along the way.

But keep in mind that there are currently only 15 stations, which can make Edinburgh Trams less helpful when digging deeper in your exploration of the city.

Fear not, though. The tram network is being extended in 2023 all the way to Newham, as well as Leith, which is known for its superior restaurants.

Just so you know, the tram is a great choice for traveling to the airport and main rail stations.

Also, the Edinburgh Park and Ride at Ingliston tram stop is the way to move if you are visiting for a day and you want to avoid having to drive in the city.

Simply park and hop on the tram to arrive in the middle of Edinburgh in under 30 minutes.

If you are looking for a proper way to travel as a group, a good recommendation is to take taxis because they usually accommodate up to five people and are also wheelchair-friendly.

Black cabs operate across Edinburgh, and they can be hailed over to you on the street, or you can stand and wait at a taxi rank outside a hotel or train station.

If you are wondering what the main cab companies operating in Edinburgh are, the answer is City Cabs and Central Taxis, which both happen to offer digital apps that you can order your caps with for fast and efficient service.

Prices are often calculated in advance and vary depending on how long the trip will take and the distance.

Uber also operates across Edinburgh if you are more comfortable with that car service method.

Edinburgh offers an extensive bus network that is quite popular as a means of being mobile in the city.

Just be aware that if you happen to be in a hurry, don’t use the bus during rush hour (7:00am-9:30am and 4:30pm-6 pm) because the city’s winding streets can become much slower due to gridlocked traffic.

Lothian Buses runs most of the buses and has over 50 routes throughout Edinburgh.

The Lothian bus timetables can be found on their website or tracking services in real-time on the Transport for Edinburgh app.

There are routes such as the N22 that are running every 30 minutes during the night if you are looking for an affordable way back to your hotel.

Skylink and Airlink buses are part of the Lothian Buses company, which connects Edinburgh Airport to the city, with a huge amount of Edinburgh’s buses being electric, which makes it an eco-friendly public transport option.

Paying for bus rides in Edinburgh is extremely flexible. You can use cash if you have an exact change, a debit or credit card, or with the Transport for Edinburgh M-Tickets feature that is a mobile platform allowing you to load your tickets right onto your smartphone.

Citymapper is a brilliant travel app for figuring out where the nearby bus stops are and piecing together your travel routes.

and get a hands-on view of their urban treasure on a bike.

Cycling is a fantastic way to lower your carbon footprint and get some exercise while you are getting around Edinburgh. Just keep in mind that in the core of the city, you will be sharing the streets with heavy traffic at times.

But outside of the Royal Mile area, Edinburgh is relatively bike-friendly, offering many dedicated cycle lanes and off-road paths.

Simply download the app and find bikes to use at 63 locations across Edinburgh.

You can come across independent bike rentals, too, like Biketrax, who have bikes to handle various forms of terrains and can get you hooked up with bicycle locks, helmets, and bike seats for children.

Cars are the way to ride if you are just making a day trip in Edinburgh in order to go directly where you want to go.

You should know that Edinburgh’s center isn’t the most car-friendly driving experience in the world, and parking may be difficult.

Car rentals are available around the city from the Enterprise and Europcar branches outside Edinburgh Waverley station.